With all 70 candidates declared, Aam Aadmi Party (AAP) has been campaigning aggressively throughout Delhi for over a month. Prominent members of the central leadership address daily public gatherings throughout Delhi. While party leaders are doing their best to communicate AAP’s vision for Delhi, other initiatives are seeking to make politics and AAP more relatable to the public.

Vishal Dadlani, an extremely vocal AAP supporter, donates his money, time, and skills to the party. His contributions are notable because like many AAP supporters, Vishal was never politically active or interested before AAP. In December 2014 he donated 2.5 Lakhs as part of a twitter challenge to #CleanPolitics. In November 2014 he performed 5 Saal Kejriwal – a catchy Bollywood-esque AAP song – at the inaugural Delhi Dialogue event, which focused on issues faced by Delhi’s youth.

I’ll donate Rs.50 to #AAP for each RT of this tweet in 24 hours. I nominate everyone following me. Tweet, donate & nominate. #MufflerMan

While browsing through my Facebook Timeline, a particular post caught my attention: Join Play 4 Change with Music Director Vishal Dadlani. The Bang Bang-star would be campaigning door-to-door in my constituency. 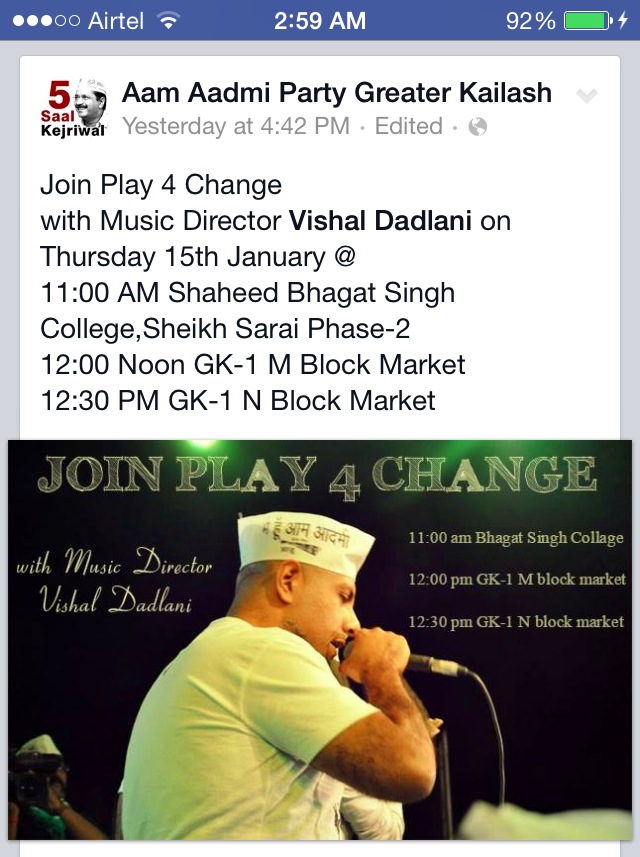 AAP’s Greater Kailash team congregated near Shaheed Bhagat Singh College at 11am on 15 January. The musically inclined sang patriotic and AAP songs, while Saurabh Bhardwaj (the candidate) and other volunteers interacted with local voters and directed traffic. The 3-hour campaign was a hybrid of live performances, a procession, and door-to-door campaigning. “Please vote for change! Give AAP full majority!” Vishal urged the crowds in between songs.

Selfies have become insanely popular, with public figures spanning from entertainers to politicians indulging. In April 2014, a story claimed that the American Psychiatric Association “had classified “selfitis” as “the obsessive compulsive desire to take photos of one’s self and post them on social media”, further defining three strands of ‘selfitis’: ‘borderline’, ‘acute’ and ‘chronic’ – depending on the frequency with which individuals’ indulged” (Independent). While the story, which spread through social media like wildfire, was a hoax, the definition is apt to describe the frantic crowds of students who were pushing and shoving to get right next to Vishal and capture the moment.

Vishal easily featured in over 1000 selfies that afternoon, making an impact on thousands of young voters as he proudly sported his “mai hoon aam aadmi” cap.

The campaign’s next stop was GK-1’s M-block market, which is an eclectic mix of high-end jewelry stores, clothing brands, and street vendors. The middle and upper class shoppers were not used to being approached by celebrities and politicians, or witnessing such a localized campaign. Politics is usually something they observe on the evening news. Saurabh and Vishal went shop-to-shop, truly conversing with staff and shoppers. A TV interview and small performance culminated the afternoon’s activities. “I think AAP has truly reduced the physical and conceptual distance between voters and politics/politicians,” Saurabh noted. 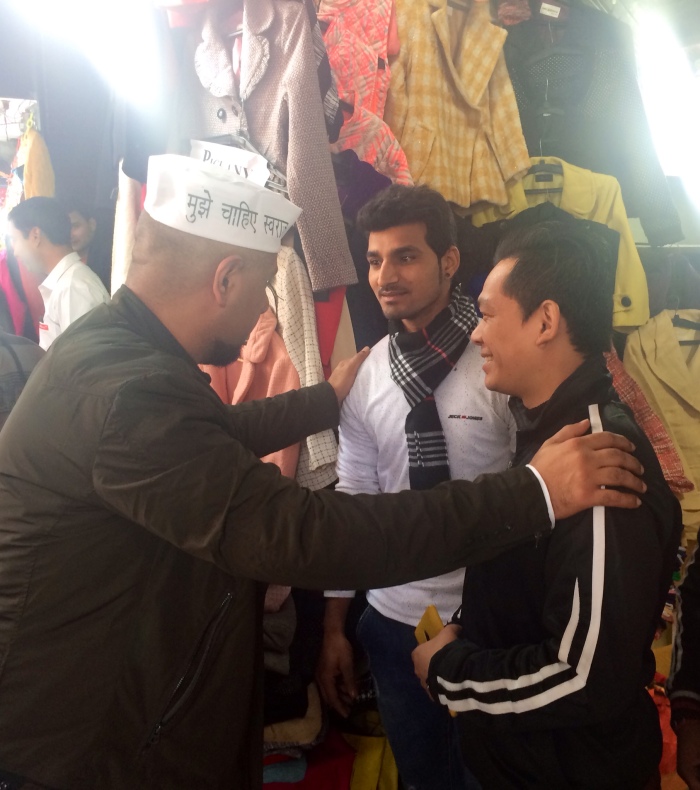 Play 4 Change is one of Aam Aadmi Party’s innovative grass root campaign initiatives, but it didn’t always create such a buzz. “It was just three of us [Sumit Negi, Kapil Chatkara, and I] wearing caps and playing music in CP, minutes from AAP’s office,” Nandan Mishra recounts, “many people used to laugh at us.” This was September 2013. AAP, as the new kid on the block, was struggling to be heard.

The initiative grew to over 10 people, some of whom would distribute pamphlets as others played their instruments through Connaught Place. “Kapil brought considerable management and professionalism,” Nandan acknowledges, “under his direction, our impact increased significantly. We quickly covered over 70 marketplaces, and then targeted weekly street markets throughout Delhi.” AAP was flooded with volunteers looking to contribute in some way. Play 4 Change provided opportunities to those who could volunteer participate part-time or on weekends.

Not the only Success story

Necessity may not be the mother of all invention, but it has been for AAP. The party’s campaign initiatives suggest the party is eager and open to innovation. Play 4 Change is not the only successful youth-led campaign initiative. Others include Dance For Democracy, in which college students organize flash mobs across the city-state, and Mango Radio, in which Sumit Negi plays a vital role.

In an industry where people under 30 rarely make a name for themselves, it is refreshing to see AAP empower India’s youth to make an impact in politics.

I want to hear from you. Cancel reply